This month I'm joining with some Blogging Friends to contribute to creating a series of posts under the topic of "Autism Devotion....."

I'm going to start with "Autism Devotion to Helping"

At our place we have routines established around helping in the house that involve everyone participating in chores and keeping their own things organised so that we all have a roll in helping the house run smoothly and stay (sort of) tidy. From the adults to the youngest, everyone has a roll to play.

That is not the kind of helping I'm going to tell you about.

I'm going to tell you about how my Autistic kids show compassion by helping spontaneously when they see someone in need. 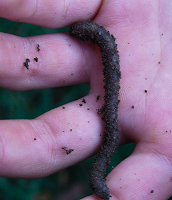 One of my favourite recent memories was on a very rainy day when MissG and I were going to pick the kids up from school. The ground was very wet in the playground and as we crossed over the paved quadrangle MissG noticed a worm on the ground. She stooped down to pick it up, and explained to me that it was very important to put it back int the garden bed because once the bell rang there would be a lot of children walking there and they might not see the worm and end up stepping on it. She returned the worm to its "home" and we walked a few more steps. And she saw another one. Then another. And another. There were probably 10 worms in close proximity to where we were standing. "Mum- help me! I won't be able to save them all!" There was a bit of panic in her voice. We started picking them up. A friend and her daughter arrived and MissG organised the other little girl to help us too. We saved all the worms we could see just as the bell rang, but MissG still had to look around to see if there were anymore in need of help.

Another time I've recently seen this spontaneous helping in action is when the kids are playing together on the Wii console. Obviously the older kids are more skilled at playing the games than the younger ones are. I have noticed that when the younger girls are struggling, and sometimes upset and frustrated with their level of success, that my 13 year old Autistic son will often respond by saying things like, "don't worry- you are doing well" or "this is a tricky level, I even find it hard, you probably just need more practice". He does his best to encourage them and help them feel better. If he feels like his efforts are not working he will often come to me and tell me that they are upset and need help.

It is a wonderful thing to see your children show compassion for others and a desire to help when they can! In some ways even more so when you see it in your kids who have so much extra to deal with themselves!
Posted by Michelle at 6:41 PM