Why do I call my children Autistic? 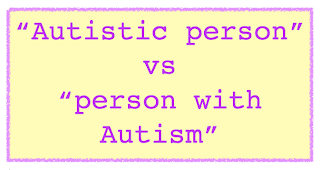 One of the debates that rages like a never ending tornado in the Autism community is over language.

Should we refer to people diagnosed with "Autism Spectrum Disorder" as persons with Autism or as Autistic people?

The question has a reputation for dividing opinions and groups, and for that reason I have refrained from writing about it previously. However, last night someone made a visit to my Facebook page to correct me on my use of language in the name of my blog. Her argument was that I should be using what is known as “person first language” when I refer to my children. She suggested the blog should be called Amazing Adventures parenting children with Autism. She also implied that my current use of language is an indication that I do not respect my children. So, I thought it might be time I wrote about this.

If you have been following my blog for any amount of time you will have noticed that I refer to my children as Autistic. As with pretty much everything I do, this is a conscious and deliberate decision that I spent a fair amount of time thinking through.

While I was thinking about it I made sure to read what Autistic adults think about this. I value the thoughts and opinions of the Autistic adults I know very much. They hold a wisdom I cannot have, as I am not Autistic. They know what it means to be an Autistic child and to grow up in a world that is not designed to support their needs. They also know what it is to be an Autistic adult, and they provide me with valuable insights that are helping me support my children as they grow and eventually become adults themselves. This is not something they are obligated to do. They are very generous in answering my questions, and I am very grateful to them for the time they give to help me learn and grow as a parent.

So, what do Autistic adults have to say on this? There is a hint in the way I have been referring to them! As I listened there were three main issues I noticed.

The first thing I heard them say was that it is important to respect the way a person wishes to identify. That is, if a person prefers to be referred to using identity first language, you should refer to them in that way. This is why I call my friends Autistic. If I come across someone who prefers to be referred to using person first language I will say they have been diagnosed with Autism or say they are “on the spectrum” instead. I tend not to use the exact phrase “person with Autism” though (unless they specifically direct me that this is what they prefer). The reason for this will become clear in the next few paragraphs.

The second thing I heard them say is that they find person first language problematic for many reasons. To explain this I am going to use the words of Autistic writers, because their voices should be heard on this issue, and because they say it so much better than I could!

Lydia, who writes the blog Autistic Hoya, has spent a lot of time looking into the issue of person first vs identity first language. Reading what she has written taught me that person first language is problematic because it feeds the idea that Being Autistic is something that can be separated from a person and that it is in some way bad. The key things she said that impacted on me are as follows:

“In the autism community, many self-advocates and their allies prefer terminology such as "Autistic," "Autistic person," or "Autistic individual" because we understand autism as an inherent part of an individual's identity..... “

You can read the whole of Lydia’s article here
and the second part of her writing on the topic here.

NeurodivergentK, who writes the blog Radical Neurodivergence Speaking, taught me that arguing for person first language by comparing Autism to Cancer is just plain offensive. To both Autistic people and to people affected by Cancer.

“Now, why I feel the autism/cancer comparison is disrespectful. First, it's disrespectful to autistic people. We don't have something growing in us attempting to kill us. We don't have a "devastating disease" which, let's face it, cancer usually is. We don't require painful chemotherapy to stay alive. The cancer comparison is nothing but lazy writing and a way to promote funding to people trying to get rid of us.

You know who else it disrespects? People affected by cancer. Ask anyone who lost a child to cancer-they'd have that child back, autistic, cognitively challenged, it wouldn't matter. Their child would be changed (in some cases almost to someone not the kid they remembered) but they would have their baby back. Ask anyone going through chemotherapy if there's anything worse than this. Hell no. Cancer is expensive, cancer is exhausting, and cancer KILLS. Give the families a little respect. Give the people who actually HAVE cancer a little respect. “

You can read the whole article here.

The third key message I got from the Autistic adults I know is that they prefer to be called Autistic. It is something they are proud of, and a part of their identity they want recognised in positive ways.

After reading what Autistic adults I wanted to talk to my kids. MissG is too young to be able to understand the issues around this topic, so I haven't talked to her about it. When she is older I will. MasterL is old enough to begin thinking about it. I asked him how he would like me to refer to him, and he said, "by my name", which is a really good point! After some discussion, when I was sure he understood what I meant he said "Sometimes I tell people I have Aspergers sometimes I say I am Autistic, but on the blog you can say I am Autistic". And that is enough for me.

My children are Autistic.

I could go on, but that’s enough for one post, I think.

I am more than happy to answer honest questions on this topic, and to provide more links and information for people genuinely interested. I will not be engaging with people who comment in order to correct me or make deliberately inflammatory remarks. This is my opinion and I have come to it after much thought- I won’t be changing because someone picks an online fight with me, and I won’t be subjecting my readers to that sort of comment either.
Posted by Michelle at 3:04 PM