I have mentioned Sensory Processing Disorder a few times in recent posts. Some of you may not be familiar with what this is, so I thought I would write a little bit about it. I will include some links to information, and then give you some insights into what SPD looks like for us.


Sensory processing disorder or SPD is a neurological disorder causing difficulties with taking in, processing, and responding to sensory information about the environment and from within the own body (visual, auditory, tactile, olfaction, gustatory, vestibular, and proprioception).
For those identified as having SPD, sensory information may be sensed and perceived in a way that is different from most other people. Unlike blindness or deafness, sensory information can be received by people with SPD, the difference is that information is often registered, interpreted and processed differently by the brain. The result can be unusual ways of responding or behaving, finding things harder to do. Difficulties may typically present as difficulties planning and organizing, problems with doing the activities of everyday life (self care, work and leisure activities), and for some with extreme sensitivity, sensory input may result in extreme avoidance of activities, agitation, distress, fear or confusion.

SPD Australia says,
SENSORY PROCESSING DISORDER (SPD) is a complex neurological condition that impairs the functional skills of 1 in 20 children. People with Sensory Processing Disorder (SPD) misinterpret everyday sensory information, such as touch, sound and movement. They may feel overwhelmed by sensory information, may seek out sensory experiences or may avoid certain experiences.
People with SPD experience their world as either Hypersensitive (over reactive, sensory avoidance) or Hyposensitive (under reactive, sensory seeker). They may also present with motor skill problems. They may react with strong emotional behaviours and experience what may be described as ‘melt downs’.
While it is estimated that 1 in 100 children in Australia is diagnosed with Autism, and we see above that 1 in 20 have SPD, it is interesting to note that the American Psychological Associations proposed diagnostic criteria for Autism Spectrum Disorder (see here) in their soon to be finalised DSM-V will include,

"Hyper-or hypo-reactivity to sensory input or unusual interest in sensory aspects of environment; ......."

which seems to acknowledge that SPD is often something that goes with Autism. Nevertheless, it is obvious that SPD occurs in many more children than Autism does.

In our household, one of the Autistic kids has SPD (MissG) and the other doesn't (MasterL- he has some sensitivities to sound and touch, but nowhere near the difficulties that G has). Because the SPD diagnosis for MissG goes with an Autism diagnosis, my experience with SPD is intertwined with Autism, as MissG's responses to sensory input and overload are influenced by her Autistic tendencies. I mention this because it serves to remind us that although people share a diagnosis, the symptoms they display and their coping mechanisms can make them look very different from each other in some ways while appearing similar in others.

So- what does SPD look like for us? (If you want to read over previous posts I have written on or around the topic of SPD you can go here and here.) MissG is mostly Hypersensitive- she over reacts to sensory stimulus and tries to avoid it. The only places on her body that she can be Hyposensitive are her mouth and her feet. This made things interesting when she was younger as everything went in her mouth, and she could be found licking all sorts of things that made me cringe! When she was old enough to be walking on her own in public places (instead of being carried in the back pack or riding in the stroller) the sensory seeking with her feet became problematic as she wanted to step on every single change of pattern, colour or texture she came across.

Hypersensitivity has been a big issue for our family. We have all learned along the way what things might set MissG off, and all to various extents do things to avoid triggering her.

When she was younger, and before we had such an understanding of SPD and what sort of things she struggled with, we went through a period of time when major meltdowns were a normal part of our day. It was common to have MissG experience sensory overload 5 or more times a day. To the "untrained eye" these meltdowns would have looked like tantrums. They could be triggered by things that seemed very small, and so looked liked over-reactions. Each meltdown would last between 5 mins and an hour, and could include crying, screaming, hitting, kicking, thrashing, throwing herself on the ground, throwing objects. Usually she would lose the ability to express herself verbally. If the meltdown was caused by an injury (as small as being bumped or as big as a cut that required medical attention) she would put her hand over the injured area and either huddle herself up silently or scream as if she had a broken bone. No one would be allowed to look at or touch the injury.

These days things are a bit better. Strategies we have used to get to this point are:

*organising a "sensory diet" that provides desirable input, including time for swinging, time for bouncing, plenty of things to touch (soft toys, squishy toys) and things to put hands in (sand, uncooked rice and dried beans), foods to crunch on, things to sip through a straw (including thick things like custard), time for water play (you could use any kind of sensory experience your child likes - some kids like playing in shaving foam or paint or goo.....  MissG loves water play). We also have some more "official" sensory tools recommended by the OT that MissG likes, including a body sock, some yoga/exercise balls, and fidget toys. 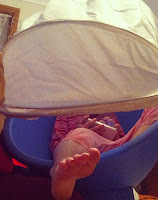 *allowing self initiated zone out time- for MissG this is often iPad or tv time, sometimes it is listening to her favourite music, and some times it is time alone in her room when she will choose to sit in the enclosed space of her bottom bunk bed and play quietly with a favourite toy.


*enforcing some sensory deprivation time- sometimes we insist MissG take some quiet time using her ear defenders, or alone in her room inside her tent or in our room under our doona.


It is a bit of a trial and error thing discovering what works best for each child. What works for MissG may not be what works for your child. Input from a good Occupational Therapist can be invaluable.

The key thing I wish someone had been able to tell me a couple of years ago when we were in the midst of numerous meltdowns a day is this- it will get better! You need to do some detective work to figure out what things will help support your child's sensory needs, but once you have done that, things will be better!

If any of you reading this think of things I've left out, or have suggestions for others coping with SPD, feel free to leave a comment!
Posted by Michelle at 1:56 PM