I am a poopy pants

Today MissG called me a poopy pants. I was so proud!

For months we have been saying "use your words" to try to help MissG learn to speak about her frustrations. She has been using a variety of strategies to avoid doing things she doesn't want to, or to let people know she is unhappy about what they are doing. She has tried hitting, pushing, running and hiding, crying loudly, and most recently completely ignoring the person (usually me when I ask her to tidy her own mess). 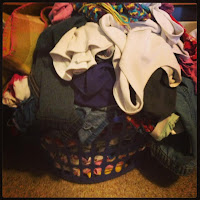 Today I asked her to put some clothes back into a clothes basket.

I encouraged, "just do one thing at a time"

"I know, but if you do it quickly you can go and play again"

"You are a poopy pants"

OK, so maybe a different choice of words will ultimately get her further, but hey- this is progress. She engaged with me verbally when she was feeling stressed. I didn't once have to say "stop ignoring me" or "use your words".

I suggested she go and sit on her bed (her safe hiding place) for a minute to calm down then come back and have a go at putting the clothes in the basket.

"Fine" she said as she went to her bed.

She did calm down. She did come back and all the clothes were in the basket very quickly. She went and played on her iPad. Later on today she even put away some of her soft toys without any resistance.

I seriously never thought I'd think being called a poopy pants by my 5 year old was a good thing, but what did I know about real life anyway?! This is so much more fun and interesting than I ever expected!
Posted by Michelle at 9:35 PM