I am still thinking about Every Student Every School

Yes, I *am* still thinking about Every Student Every School.

This is because it is still affecting my sons education.

For those of you who are new to the blog you might need to do some reading of older posts to understand exactly what I am writing about here. You can do this by using the search function at the top right of the page and looking for "Every Student Every School".

The short summary of the situation is that last year our state government decided that a good way to save money in the education system would be to remove most individually allocated disability support funding.

MasterL used to be allocated individual funding that allowed him to receive teacher aide support in his mainstream high school classes. The funding is now gone, so he does not get the support he needs.

Last year the school was able to minimise the impact this had on MasterL by fiddling with some existing funding. This year they can't do that anymore. I knew that would be the case, so I wasn't surprised when MasterL started to say things like "maths is too hard" and "I don't want to go to school today".

So when I met this week with the High School Principal, and then the Learning Support Unit Co-ordinator, to chat about how things are going this year I found myself in the position of - once again- having to sell my child's so called deficits to them in order to get some action. I have to use phrases like "communication impairment" and "selective mutism" and "inability to read social situations", instead of talking about how smart and funny and persistent and kind and creative he is.

I HATE having to do that. 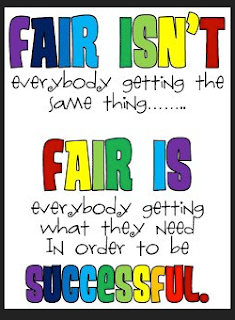 And even after doing that, the reality is that there still just isn't the funding available to provide the social and communication support he needs at school. And again I am left with the unsettling feeling that people believe my son being given the opportunity to achieve his dreams and desires and reach his full potential is less important than other people being given the same opportunity. And that makes me angry because it is not fair. 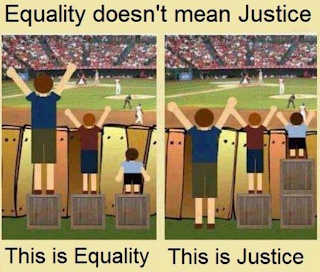 He is just as much worth investing in. He has just as much potential to make significant and valuable contributions to society as anybody else. Failing to support him adequately simply for lack of willingness to provide a few extra dollars a year for his education is discrimination. I could go on and cite studies that prove financial expenditure now on education will prevent greater expenditure on welfare later, in an effort to convince the politicians. But really, why bother? They aren't going to change their policy. They are not interested in fairness or justice, they are interested in saving money in the short term so the majority will vote for them in the next election.

And frankly, my energy is better spent being there for my kids right now, when they need me, than repeatedly head-butting a system that doesn't care and won't change.


*I have used two images in this post that I have seen on Facebook, but I have been unable to find out who they images were originally made by. If they are yours or you know where they came from please let me know so I can give credit to the creators. Thank you.
Posted by Michelle at 11:11 AM