More discussion last night with L about how school is going. Academically, he is powering on. Socially- not so much. His one friend has been absent for the past 2 days, so L chooses to be alone during recess and lunch times. This makes me a bit sad, but in the past I have told myself it's OK because he is happy that way, which kind of helps me feel better. 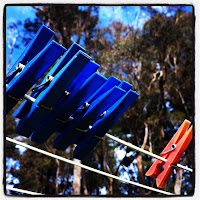 But it seems now that his desire to be alone if his friend is not there is causing problems. It's not that he couldn't go and hang around with other kids in his class. He'd be welcome to. He's been invited to. But he doesn't want to. They don't do things he wants to be involved in, so he prefers to be alone. This applies to everyone- even teachers. He told me that when he is by himself in the playground, people come up to him and try to talk to him. He thinks it's because they are being nice and checking up on him, but he says he finds it "creepy". He doesn't want people to come up and ask him if he's OK, or if he wants to join them, or even to just sit near him and say 'hi' when they do. He doesn't want to talk to them at all, even to say 'hi' back, because he doesn't know them, he doesn't understand what they want from him, and he just wants to be alone. His words. Some people have even placed a hand on his arm or shoulder as part of their greeting and he really *hates* that. So I asked him what he does if people approach him. He told me he usually doesn't answer them, and that he just walks away without looking at them.

E was listening to this conversation between L and myself. When L left the room she told me that she thinks if he does that too often he will become known as "the weird" kid and he will be picked on and harassed because kids will find it funny to see his unusual reaction. Which is exactly what I was worrying about as I was listening to him talk. She said some of her friends have already told her they think he is a bit strange.

Again, the difficulty of coaching him through this is that I am not there to see what these interactions look like, so I am not able to interpret the intentions of these "creepy" people and help him learn to interpret them appropriately for himself. I am so out of my depth.

I also worry about what is going to happen when L's one friend gets tired of playing the same things, and talking about the same things over and over again? I know that it is starting to happen. L says sometimes his friend wants to go and play with other people, and L doesn't want to join  them. Which is normal, and right. But sad for L, and for me. How long do we have before L is alone in the playground all the time? How do I help him gain confidence to be around people who have different interests to him, when he can already articulate that he knows people think he is "strange" (his words)?

The last thing I want is for my son to become known as "the weird kid". I talked about being weird in my post "The weirder the better", and I still believe there is nothing wrong with being unique or "strange" or  "weird", but right now this is causing my boy problems and anxiety. What should I do? If you have experience getting your own ASD teen boy through this stage, I'd love to hear from you.
Posted by Michelle at 11:23 AM