So, today my dad sent me the link to this gem of media reporting <insert sarcasm font>

Here is the link if you want to go see it in it's original form....  http://www.smh.com.au/opinion/political-news/scheme-will-cover-cost-of-autism-treatment-20130510-2jd94.html

Below is the full text of the article.

The national disability insurance scheme will cover ''most'' people with autism and could pay the full cost of early intervention programs, Disability Reform Minister Jenny Macklin has declared in the latest clue as to what the $22 billion-a-year scheme will cover.
Autism affects about one in 100 children in Australia. Diagnoses of the condition more than doubled in Australia from 2003 to 2009 - 64,000 Australians have autism, latest figures show.
There were fears that the condition would be excluded from the scheme, or that the support provided by DisabilityCare Australia would be no greater than the current program, which funds only a fraction of the cost of the most effective therapies.
Opposition Leader Tony Abbott has demanded the government clarify whether autism will be included in the scheme, but ministers have only pointed to the legislation passed in March, which set broad parameters.
But in an interview with Fairfax Media, Ms Macklin confirmed the scheme would support ''most'' people with autism but stressed the agency would work with people to identify their individual needs.
''People are very different, they have very different levels of disability, and very different levels of ability, so what they need from DisabilityCare Australia will really vary.''
The government's Helping Children with Autism program provides families of children with autism $6000 a year for two years. About 19,000 children used that funding in the program's first five years. But the annual cost of applied behaviour analysis therapy - the only specific early intervention the federal Families Department rates as effective based on ''established research evidence'' - is $40,000.
That research shows about 50 per cent of children with autism are able to reach a normal educational outcome by age six.
Ms Macklin said that where an early intervention therapy is deemed ''reasonable and necessary'' DisabilityCare would be able to fund its full cost.
Funding applied behaviour analysis therapy could cost the scheme more than $300 million a year once it is fully operational.
Ms Macklin said DisabilityCare would over time replace the autism program, but no family would see their level of support reduced.
''If people are getting an autism support package from the Commonwealth now, that will continue until that child is brought into DisabilityCare Australia and their needs are assessed,'' she said.
Nicole Rogerson, chief executive of Autism Awareness Australia and the mother of a 17-year-old boy with autism, said ''we would be absolutely thrilled if what the minister is saying actually happens''.
''Autism is not a stagnant diagnosis,'' she said.
''If we give children with milder forms of it really intensive, evidence-based intervention, some of those children will go on to come off the diagnostic criteria for autism and will go on to have completely independent lives, and that should be the outcome of the NDIS.''


This is the first time I've commented on this blog about the NDIS. I'm very skeptical of it, and this article highlights most of the reasons why.

Firstly- learning that "The national disability insurance scheme will cover ''most'' people with autism and could pay the full cost of early intervention programs" (emphasis mine) does nothing to reassure me that the new system will be any better than the old one. In fact it could be worse for many. Come to think of it, I've not seen any information anywhere so far that tells me exactly how anything will be done to make services or funding better, easier to access or more appropriate for anyone with a disability.

Autism is not a disease.

It is not an illness.

It is not something that you can get rid of.

It is a neurology.

It is the way a brain works.

It is part of a person.

It is for this reason that I disagree with Nicole Rogerson (" chief executive of Autism Awareness Australia and the mother of a 17-year-old boy with autism") that it should be an outcome of the NDIS that children should "go on to come off the diagnostic criteria for autism". Being not Autistic any more is not a prerequisite to living an independent life! Neither is still being Autistic but hiding it so well that no one can tell. I know plenty of Autistic Adults who live independently... many of them earning more than I do in their jobs. Lots of them raising children, some of them as single parents.

{And while we are talking about Autisitic Adults, why aren't they getting a mention in this article? Sure it's important to support Autistic children, but what about the adults? They have support needs too. I sincerely doubt that in 6 years time MasterL is suddenly going to stop needing support. And no, before some clever person points out that I am contradicting myself, I don't think that needing support and living independently contradict each other. I live independently, and find the support of my husband family and friends invaluable, as I'm sure most people do- Autistic or not.} 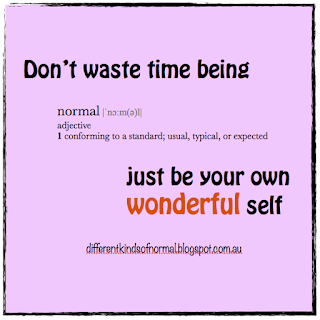 For the same reason I also disagree that ABA is the be all and end all of therapy options. Don't get me wrong- I like science, and scientifically proven therapy is a good thing. ABA does what it says it will do. It helps reduce undesirable behaviours. The thing is I do not want to send my child into 20 hours a week of therapy designed to train them not to engage in behaviours that are only undesirable because society deems them to be for no real reason other than that's how it is.

I don't want my kids rewarded for not flapping.

I don't want my kids to be forced to look people in the eye.

I don't want my kids to become indistinguishable from their peers.

And if that's what the NDIS will  be providing to "help" Autistic people, they can count my family out.
Posted by Michelle at 11:41 AM